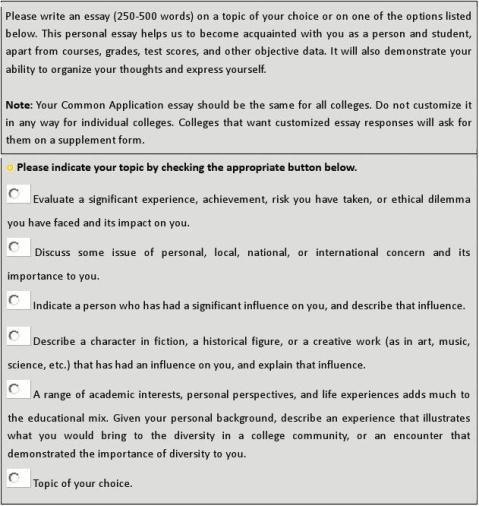 Please briefly elaborate on one of your extracurricular activities or work experiences in the space below (1000 character maximum).

I like playing football, and last year the football team in our high school accepted me to be a member. After that we had training in field twice a week. One day captain told us we will have a competition with another high school. Therefore I took exercise by myself every day after school.

The day coming, I went to the field early and waiting them for half an hour. According to captain’s instructions, I was a substitute. I thought I will play soon, but with the passage of time, from the end of the time more and more closing. The chance that I could play became more and more small. The time was up, I sited there for an hour.

I need to face these; however, I was very sad because I prepared for the competition long time. I

am a new player who need more practice, and it is a team

It was a sultry afternoon in early summer. The air was hot and damp, carrying the saline scent of the tropical sea. The class had just finished their lessons of the day, and noise was arising while Mr. Darrel was collecting his teaching books before heading for the office.

The story went back to a summer camp in XXXX, when I was selected to attend a summer program in Lake Forest Academy in Chicago, where I got mingled with people of different

nationalities. I studied and lived with these lovely friends for five entire weeks. At the end of the program,there was an English Talent Competition in which all students were required to

participate. I was a bit exhilarated because I had participated in and been awarded championship of similar competitions in my home country. All went well until the commentary session. The impartial judges gave high praises and I quite enjoyed it. Then one of them remarked, “You remind me of my last trip to China. I recognize your Chinese accent!” It was only an unwitting joke, but to someone who had always thought that her oral English was impeccable, it was the beginning of a nightmare.

Before that I had always thought my oral English sounded quite native. As one of the top students in the class, I started reading English novels when I was in junior high school, and the Harry Potterseries was my favorite. Among all Hogwarts Houses, my favorite is Slytherin, who honors the spirit of “using all means to achieve ends and never stopping without conquer”.After the summer camp, I was really frustrated, but the“Slytherin” spirit inside my heart motivated me to fight.

So I madewell-plotted plan. I downloaded English movies and repeated the lines sentence by sentence; then I recorded my voice and compared it with the original version, and revised my pronunciation again and again. Sometimes I had to repeat one sentence for hundreds of times. Yet it didn’t seem to work. After several months, my accent wasn’t experiencing satisfying changes. In fact, it seemed as stubborn as I was and resisted any change.

Then Mr. Darrel noticed my change and invited me to his office.

“I have noticed that you are struggling with your pronunciation lately”, said Mr. Darrel. “Is there anything I can do to help?”

This wasn’t the first time we had similar conversations, and my answer was as usual. “Thank you, Mr. Darrel, but I think I just need more time to practice.”

“Are you ashamed of your accent?” he suddenly asked. Confirming his conjecture from my

averted sight, he continued. “Do you know that people’s accents will hardly change after they are 12 years old?”

That was something that I had never heard of before, and I was stunned.

Mr. Darrel continued, “Your pronunciation has improved lately, though not as significant as you’d expected. However, always remember that English is but a tool for communication. Some things

are more important than accents, for example, your ability to properly organize your thoughts in English.”

His words stroke me like a lightning. I instantly realized how superficial I had been all the time. To me learning was a process that could give me a sense of fulfillment and superiority, but I had never pondered how I could use what I had learnt, which, however, is exactly the purpose of

learning. My stubbornness to perfect my pronunciation had some rationale, but there were more important things that I should focus on.

I still spend half an hourpracticing my pronunciation, but I do not care that much about my accents now. I guess they will learn to perfect themselves, just like I learn to grow and mature.