Dear teacher and schoolmates,1t’s a great pleasure for me to be today and share my

Thank you for listening. 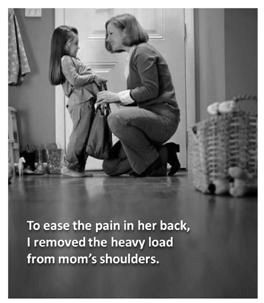 The burden of students has been a hot topic for

years, but the load of parents has received little attention, especially from their own children.

Conflicts with others are common in everyday life.

When we read newspapers, we often come across such English words as “AIDS” and “PK.” When we watch TV, we frequently hear words like “NBA” or “PM2.5.” When we speak, we automatically use words like “OUT” or “Bye-bye.” English words and expressions like these are getting popular. They have already become part of our daily language. And 239 English words have been included in the latest Dictionary of Contemporary Chinese.

For most people, it’s almost impossible to operate a computer without a mouse, let alone surf the Internet. A well-chosen mouse is really handy, flexible and convenient in controlling the screen. With the functions of inserting, deleting, moving and copying, it enables us to edit test, browse web page and download what we want. It can even bring us a flood of music, movies and PC games. Just imagine, all this can be done with a cute mouse.

A convenient tool can certainly make our work easier, but it doesn’t always help in a positive way. Too much ready information on our fingertips leaves little room for knowledge pursuing. Too many ready answers make us less excited in finding truth. Relying too much on mouse clicking makes us lazier and less creative both mentally and physically.(153 words)

（2010·江苏）Dear teacher and schoolmates,1t’s a great pleasure for me to be today and share my experience of learning English with you.I'm interested in English and hope to be an interpreter in the future.Naturally lt’s very important for me to learn English well .As everybody knows vocabular is an important part of language, just like bricksin a building .I usually memorize twenty new words a day and put them to use whenever possible . After class．I often listen to English programs on TV and on the radio .Besides ,I've learned a lot from the Internet and other sources.

Now．I'd like to make some suggestions on English teaching and learning in our school.Firstly ,we should be given more opportunities to use what we’ve learned ln order to have a better grasp of it.Secondly．I hope our teachers can recommend more interesting books and magazines and give us more free time to read them. Finally，1 suggest we have more Endish activities，such as English contests and festivals.

Thank you for listening. (150words)

The picture shows us a touching moment when a little girl comes to greet her working mom. Realizing her mom must be very tired after a day's work, the girl helps to remove the bag from her shoulder. In response, the mom kneels down to show how happy and thankful she feels.

All this reminds me of my mother who has been doing whatever she could to let me have the best. But, totally enagaed in my own study, I seldom pay my attention to what mother needs and feels, and always think studying well is the only thing I could do in return. Now I know I can do my bit to help with the everyday washing, bedroom cleaning, or at least prepare breakfast myself, so as to share mother's daily burden. The picture convinces me it is even more important to be a good daughter than a "good" student.

（2012·江苏)Conflicts with others are common in everyday life. During the basketball game yesterday afternoon, Su Hua and Li Jiang bumped into each other, trying to catch the ball. Then they started shouting and yelling, and it turned into a horrible quarrel.

To be honest, it was Su’s fault but Li was also to blame ----they were not calm enough and both said some really mean things. They cared too much about winning and losing. As a matter of fact, blocking, pushing and bumping are just part of a tough game.

To avoid such conflicts, we should be kind to one another, which is essential to enjoying a harmonious life. It is also a virtue to forgive and forget, especially in such a competitive and stressful society. Instead of blaming each other, we should communicate more and put ourselves in others’ place.

Don’t be self-centered and try to be considerate. We must learn to handle conflicts calmly and wisely. (150 words)

People celebrate Earth Day differently. In Picture 1, a man is trying to put up a banner on a lonely tree surrounded by stumps, but in vain, while Picture 2 shows a couple happily planting trees.

The message conveyed here is clear: “ Actions speak louder than words.冶 Our earth is suffering severe damage. Should we just pay lip service or take practical measures to protect it? The answer is definitely the latter. Immediate actions should be taken, like stopping cutting down trees, to better the environment.

Actions are important in other fields, too. Instead of shouting empty slogans, it is more meaningful to donate books and sports goods to children in need. We should strictly and voluntarily follow traffic rules, stopping at the red light rather than complaining about traffic jams. Only when we match our words with actions can we make a difference in whatever we hope to accomplish.

Today, more and more English words find their way into the Chinese language. Even the Dictionary of Contemporary Chinese includes 239 English words. Some people support it while others do not.

Generally, I am in favour of the inclusion. As the number of English learners is on the rise, it’s not difficult for them to understand these words in Chinese contexts. Besides, it is, on some occasions, more convenient to use English words. Most people nowadays use “IT” instead of its translation “xinxi jishu.” In our global village, we can see that it’s not uncommon for one language to borrow words from other languages. In English, there are many words borrowed from Latin, French, or even Chinese. In fact, Chinese has never stopped taking words from other languages, say, “ganbu” or “minzhu” from Japanese.

So, it’s safe to conclude that it is reasonable to include English which facilitates daily communication.

With English words getting popular in both media and daily life, a Chinese dictionary has

included 239 of them, leaving the public divided into two opposing groups: “For” and “Against.”

I tend to take the “Against” side for two reasons. Firstly, this inclusion has actually polluted our mother tongue. Sooner or later, many English accents will rise and fall with the four Chinese tones. And, rules don’t tell us how to pronounce such English-turned Chinese words as “wifi” and “Out” in a Chinese way! Secondly, such an inclusion may give rise to prejudices of the educated against those with little knowledge of English. Just for one illustration, while college students take “Bye-bye” for granted when parting from each other, it may unconsciously hurt the feelings of someone who is used to “zaijian.”

In short, not only has the inclusion poisoned Chinese, it may also bring about distance between the Chinese people