"Zhong Qiu Jie", which is also known as the Mid-Autumn Festival, is celebrated on the 15th day of the 8th month of the lunar calendar. It is a time for family members and loved ones to congregate and enjoy the full moon - an auspicious symbol of abundance, harmony and luck. Adults will usually indulge in fragrant mooncakes of many varieties with a good cup of piping hot Chinese tea, while the little ones run

around with their brightly-lit lanterns.

"Zhong Qiu Jie" probably began as a harvest festival. The festival was later given a mythological

flavour with legends of Chang-E, the beautiful lady in the moon.

According to Chinese mythology, the earth once had 10 suns circling over it. One day, all 10 suns appeared together, scorching the earth with their heat. The earth was saved when a strong archer, Hou Yi, succeeded in shooting down 9 of the suns. Yi stole the elixir of life to save the people from his tyrannical rule, but his wife, Chang-E drank it. Thus started the legend of the lady in the moon to whom

young Chinese girls would pray at the Mid-Autumn Festival.

In the 14th century, the eating of mooncakes at "Zhong Qiu Jie" was given a new significance. The story goes that when Zhu Yuan Zhang was plotting to overthrow the Yuan Dynasty started by the Mongolians, the rebels hid their messages in the Mid-Autumn mooncakes. Zhong Qiu Jie is hence also a

commemoration of the overthrow of the Mongolians by the Han people.

在14世纪，中秋节吃月饼又被赋予了一层特殊的含义。传说在朱元璋带兵起义推翻元朝时，将士们曾把联络信藏在月饼里。因此，中秋节后来也成为汉人推翻蒙古人统治的纪念日。 字串7 During the Yuan Dynasty (A.D.1206-1368) China was ruled by the Mongolian people. Leaders from the preceding Sung Dynasty (A.D.960-1279) were unhappy at submitting to foreign rule, and set how to coordinate the rebellion without it being discovered. The leaders of the rebellion, knowing that the Moon Festival was drawing near, ordered the making of special cakes. Packed into each mooncake was a message with the outline of the attack. On the night of the Moon Festival, the rebels successfully attacked and overthrew the government. What followed was the establishment of the Ming Dynasty (A.D.

Mid-Autumn Day is a traditional festival in China. Almost everyone likes to eat mooncakes on that day. Most families have a dinner together to celebrate the festival. A saying goes, "The moon in your hometown is almost always the brightest and roundest". Many people who live far away from homes want to go back to have a family reunion. How happy it is to enjoy the moon cakes while watching the full

moon with your family members.

The 15th day of the 8th lunar month ,the joyous Mid-Autumn Festival was

on the fifteenth day of the eighth moon, around the time of the

autumn equinox（秋分）. Many referred to it simply as the "Fifteenth of the Eighth Moon".

This day was also considered as a harvest festival since fruits, vegetables and grain had been harvested by this time and food was abundant. Food offerings were

placed on an altar set up in the courtyard. Apples, pears, peaches, grapes,

that cooked taro be included because at the time of creation, taro was the first food discovered at night in the moonlight. Of all these foods, it could not be omitted from the Mid-Autumn Festival.

The round moon cakes, measuring about three inches in diameter and one and a half inches in thickness, resembled Western fruitcakes in taste and

consistency. These cakes were made with melon seeds（西瓜子）, lotus seeds（莲籽）, almonds（杏仁）, minced meats, bean paste, orange peels and lard（猪油）. A golden yolk（蛋黄） from a salted duck egg was placed at the center of each cake, and the golden brown crust was decorated with symbols of the festival. Traditionally, thirteen moon cakes were piled in a pyramid to symbolize the thirteen moons of a

"complete year," that is, twelve moons plus one intercalary（闰月的） moon.

The Mid-Autumn Festival is a traditional festivity for both the Han and minority nationalities. The custom of worshipping the moon can be traced back as far as the ancient Xia and Shang Dynasties (2000

Dynasty(1066 B.C.-221 B.C.), people hold ceremonies to greet winter and worship the moon whenever the Mid-Autumn Festival sets in. It becomes very

A.D.) that people enjoy and worship the full moon. In the Southern Song Dynasty (1127-1279 A.D.), however, people send round moon cakes to their relatives as gifts in expression of their best wishes of family reunion. When it becomes dark, they look up at the full silver moon or go sightseeing on lakes to the

celebration becomes unprecedented popular. Together with the celebration there appear some special customs in different parts of the country, such as burning incense（熏香）, planting

Mid-Autumn trees, lighting lanterns on towers and fire dragon dances. However, the custom of playing under the moon is not so popular as it used to be nowadays, but it is not less popular to enjoy the

bright silver moon. Whenever the festival sets in, people will look up at the full silver moon, drinking wine to their happy life or thinking of their

relatives and friends far from home, and extending all of their best wishes to them. Moon Cakes 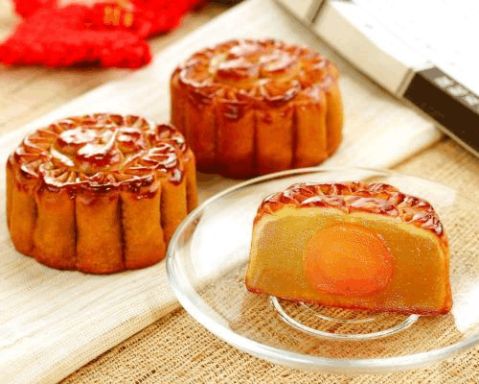 There is this story about the moon-cake. during the Yuan dynasty (A.D. 1280-1368) China was ruled by the Mongolian people. Leaders from the preceding Sung dynasty

(A.D. 960-1280) were unhappy at submitting to the foreign rule, and set how to coordinate the rebellion without being discovered. The leaders of the rebellion, knowing that the

Moon Festival was drawing near, ordered the making of special cakes. Backed into each

moon cake was a message with the outline of

the attack. On the night of the Moon Festival, the rebels successfully attached and

overthrew the government. Today, moon cakes are eaten to commemorate this legend and was called the Moon Cake.

For generations, moon cakes have been made with sweet fillings of nuts, mashed red beans, lotus-seed paste or Chinese dates（枣子）, wrapped in a pastry. Sometimes a cooked egg yolk can be found in the middle of the rich tasting dessert. People compare moon cakes to the plum pudding and fruit cakes which are served in the English holiday seasons.

Nowadays, there are hundreds varieties of moon cakes on sale a month before the arrival of Moon Festival. 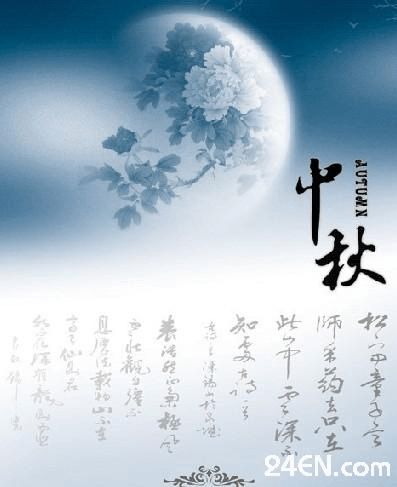